The Future of The 3.5mm Headphone Jack on Smartphones 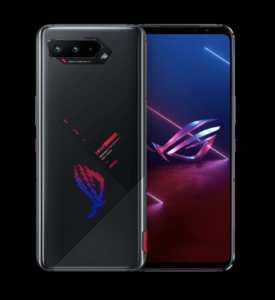 The demise of LG’s smartphone division left those consumers that still want a headphone socket on their phones with few great choices. A physical 3.5 mm socket is almost always the better option if you care about audio quality and the only option if you need a seamless experience that allows you to consistently and easily switch between music, videos, games, phone calls, devices, etc. Bluetooth headphones are continuing to improve, but are still decades away from rivaling the quality and reliability of the best wired headphones. Apple might prefer us all to forget this fact, but there is nothing to stop anybody enjoying the convenience of Bluetooth headphones on smartphones with a 3.5 mm socket. Conversely, the many advantages of a wired connection are obviously not available on phones lacking a 3.5 mm socket. A 3.5 mm jack connection doesn’t require regular charging, can’t die when its battery runs flat, doesn’t restrict you from charging and listening to wired headphones at the same time, doesn’t suffer from lag, dropouts or connection problems, doesn’t cause problems when shifting your headphones from one device to another, and generally provides superior audio quality – mainly because of poorer-quality components and tuning in most Bluetooth headphones where space for the drivers, internal tuning cavities and housing has to compete with batteries and wireless circuitry.

Dongles remain an option for those without a headphone socket (and some dongles sound fantastic, such as the HiBy FC3), but we have not yet found any dongle that produces the same seamless experience as that of a wired headphone socket. Dongle volume controls are typically coarse-grained. Disconnecting and reconnecting the dongle risks blasting your eardrums, and dongles frequently experience audio problems when the sound source is switched between apps.The iPhone was first promoted by Steve Jobs as the swiss-army knife of a device – not three separate products, but one product that could do everything. Without a headphone socket, that’s no longer the case, and as SoundGuys point out, the huge proliferation of dongles is a tacit admission of that problem.

Thankfully there are still options in 2022 for smartphones with a 3.5 mm headphone socket.

The Xperia 1 iii appears to have been primarily designed as a camera phone (the dedicated camera button and the camera’s fine-tuning abilities are excellent). Its headphone socket works well – not necessarily the best for either audio quality or power, but it works consistently without any of the weird re-sampling artifacts that haunted the LG phones on third-party apps, such as Tidal or Qobuz. We like this phone a lot – as a phone. It is a manageable size and it looks and feels like a premium device. However, battery life is mediocre and like most Sony audio products, we’d rate the Xperia 1 iii’s sound quality as good, but not necessarily great. It has an unfortunately-high output impedance of around 5 Ohms. 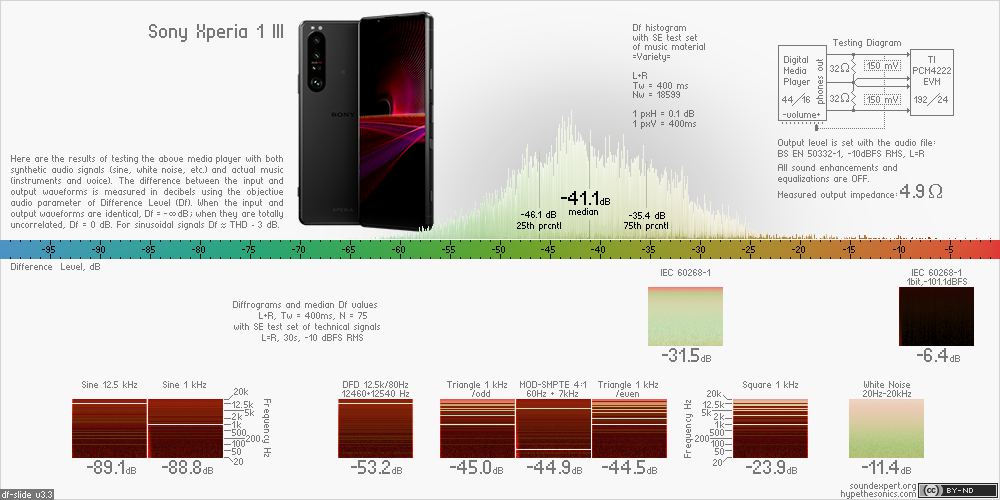 One emerging category of phone that looks particularly interesting is that of the gaming phone. Recent gaming phones to emerge with a 3.5 mm socket are the ASUS Republic Of Gamers (ROG) Phone 5 and 5s. These phones both contain the ESS 9280AC DAC chip, which is a newer version of the quad DAC that appeared in the now-discontinued LG phones and the exact same DAC that featured in the outstanding HiBy FC3, only without MQA support. Keen observers might note that the LG V60 also lacked hardware MQA support and that might be considered a drawback to those that believe in the dark magic of MQA (we don’t, although we do like the interface and the size of the music catalogue in Tidal). We do not consider the absence of MQA support a detriment to the ROG phone 5(s) – in fact, we’re happy to see people aren’t being asked to pay MQA licensing fees. Truly lossless high-resolution streaming, via apps like Qobuz, sounds excellent on the ROG Phone 5s we tested. (We will refer only to the 5s from this point on since the DAC is identical in the 5.) We have noted in the past that the ESS 9280AC DAC is, in some important ways, able to surpass even the best desktop DACs from Chord Electronics: https://www.hypethesonics.com/hiby-fc3-minihype.

While intended for gamers (with neat features, such as built-in physical capacitive-touch trigger buttons and external cooling fans with additional hardware controls), these ROG devices are fantastic phones that ought to have a wide appeal even to those that never game on their smartphones. They have powerful CPUs, fast refresh rates, beautiful displays, and extremely smooth and responsive touch screens. If you aren’t running applications that require heavy processing or high refresh-rate graphics, the 6000 mAh battery can provide long run times. For a comparable (1/2 Tb) storage capacity, the ROG phones are actually cheaper than many of the current crop of flagship phones, such as the Galaxy 21 Ultra or iPhone 13 Pro Max. If you don’t mind the lack of wireless charging, the ROG phone 5s has pretty much everything else, including, as of March 2022, the best built-in audio quality (both via its built-in speakers and via a 3.5 mm socket) of any smartphone – or indeed any portable DAP – we’ve yet tested.

The ROG Phone 5s’ audio operates in a very similar manner to that of the old LG quad-DAC phones. While the ROG Phone 5s does not allow any choice of anti-aliasing filter and doesn’t have a very fine-grained volume control, it has the same three output-power modes that are triggered by the impedance of the connected set of headphones. Normal-device mode is triggered by attaching a headphone with an impedance less than about 50 Ohms and allows a maximum output of around 400 mVrms. High-impedance mode is triggered when connecting a headphone with an impedance between roughly 50 Ohm and 700 Ohm and allows a maximum output of around 2 Vrms. External-device (or aux) mode is triggered by attaching any device with an impedance greater than about 700 Ohm and results in a roughly 1.1 Vmrs output (suitable for a line-in to an external device). 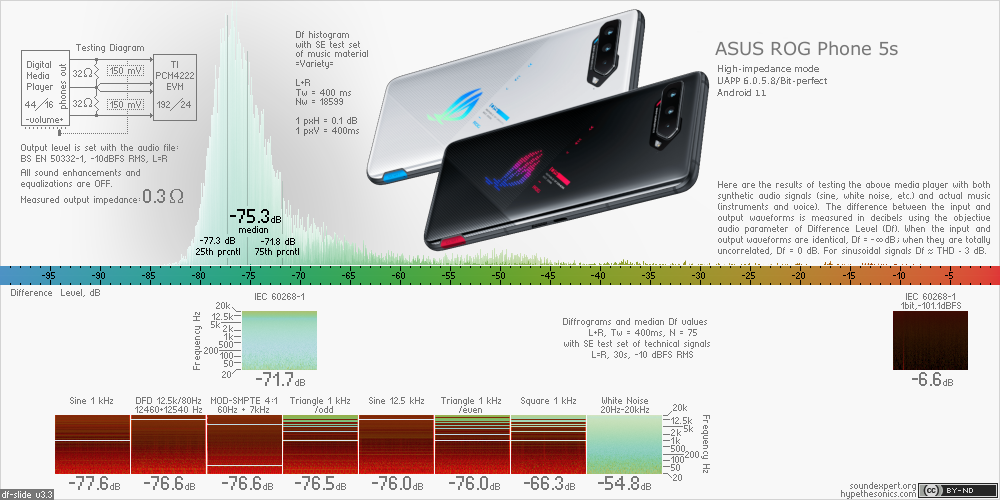 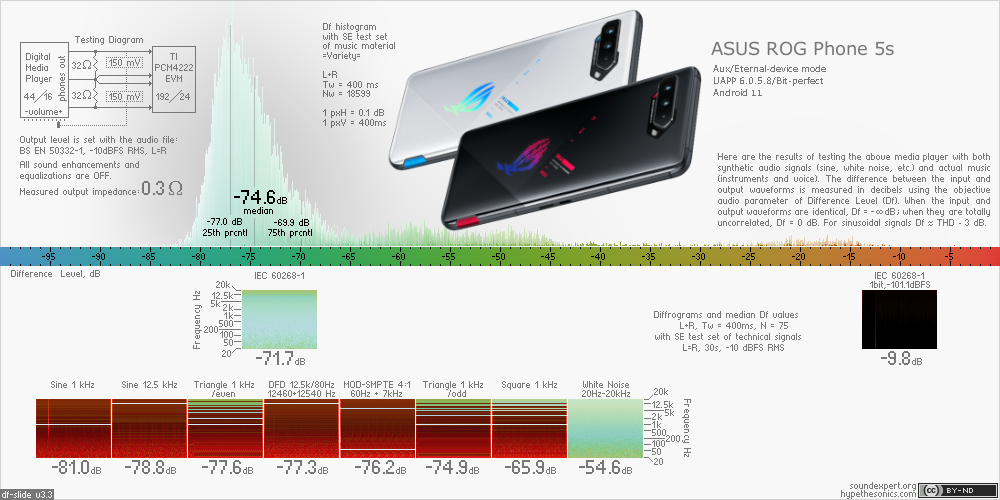 The sound from its built-in stereo speakers is also quite astonishing – easily better than anything we’ve heard from any existing phone, or even tablet, and good enough that there’d be little need to carry around a separate Bluetooth speaker. Its internal hi-res DAC is supported by UAPP and ASUS have found an adequate fix for the Android 44 kHz->48 kHz resampling problem that plagued every single generation of LG phone, which means the ROG Phone 5s’ internal DAC will work with your third-party apps. For audio purists, we ought to elaborate on what we mean by ‘work with your third party apps’. In general, everything that is not sent via a direct audiostream to the DAC gets routed through Android’s mixer at 48 kHz. That’s true of the ROG phone 5s too, however, the ROG phones use 48 kHz at 32 bit, whereas the LG phones all used 16 bit which caused very obvious artifacts that were easily audible on sensitive headphones at low volume. The ROG Phone 5s doesn’t have this problem. In fact, our tests on the HiBy FC3 suggest that this particular DAC is actually more accurate at 48 kHz playback than 44 kHz, and that this appears to more than offset any 44 kHz->48 kHz interpolation errors. Technically anything other than 48 kHz PCM playback will still need apps like UAPP for bit-perfect playback, but our sound-quality tests should still hold up to the threshold of human hearing for any third party apps. 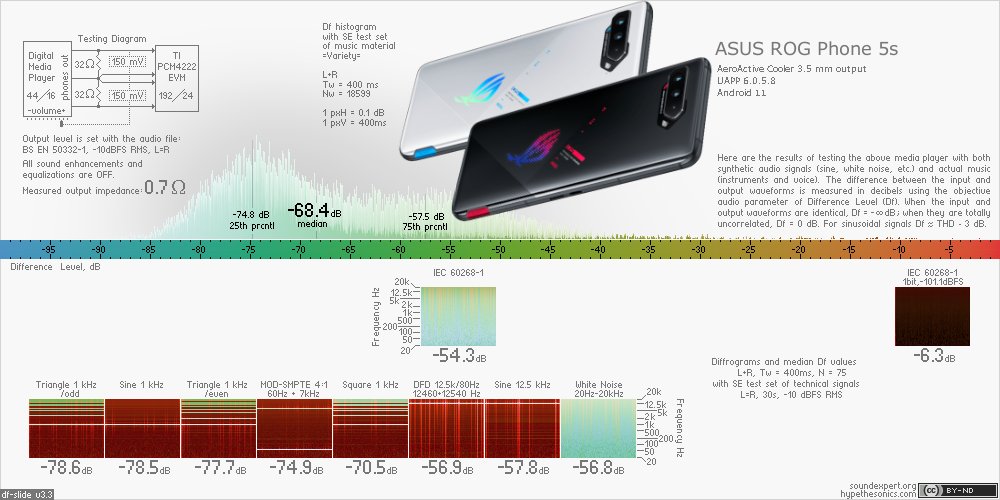 No device is perfect, and the ROG Phone 5s has some issues to be aware of. In our tests, the ROG Phone 5s’ LTE speeds have often exceeded 5G speeds on the LG V60, but despite offering numerous 5G bands that are supported by US carriers (we tested the NA version of this phone), we were not able to successfully establish a 5G connection with AT&T’s towers. We reached out to ASUS about this and they stated that 5G support for T-Mobile is currently available, but AT&T’s certification is still pending. So as with most current 5G phones, 5G support will depend on your region and carrier. The ROG Phone 5s also lacks a microSD slot, although a version is available with 512 Gb’s worth of internal storage. You might want to use the supplied case with your ROG Phone 5s and not drop it from a large height or try to bend it, because tests suggest it isn’t the most durable phone ever made. The ROG Phone 5s is claimed to be water resistant, but does not have any IP waterproof rating. It does not support wireless charging, however, it does support some interesting wired-charging modes designed to help preserve battery life, such as steady-charging, limit charging (to a maximum percentage), and by-pass charging (which let’s you play games or otherwise use the phone directly from USB-C power while not draining or charging the battery). Curiously the ROG Phone 5s also has two USB C charging ports – one on the bottom and one on the side. Although the most obvious purpose for this is to simply offer users a choice, and presumably avoid USB plugs getting in the way of landscape-mode gaming, Android Police ran an article offering a brilliant, physics-defying take on this subject.

The bells and whistles on the ROG Phones are quite impressive, such as dual-band WiFi (which avoids you having to manually switch between WiFi bands as you roam around your house or office) and a fun augmented-reality unboxing experience. In terms of audio, we prefer the sound of the ROG Phone 5s to that of the LG V60 with most of our headphones, mainly because of the ROG Phone 5s’ lower output impedance. Even if you’re not into gaming, the ROG phone 5 or 5s are worthy of serious consideration. The combination of the ESS 9280AC Pro DAC’s high accuracy and low output impedance gets the ROG Phone 5s our vote for the best DAP you can currently buy, at any price.

Looking to the future, the gaming-phone market looks promising, with other companies such as Nubia and Lenovo already having launched their own devices to compete with the ROG phones. So while audio enthusiasts may not have created sufficient demand for LG’s smartphone division to have ever turned a profit, gamers make up a larger demographic, and this, together with excellent engineering from ESS and lower prices for their DAC chips through mass production, may yet spell a healthy future for high-quality, lag-free wired audio.

It is somewhat ironic that after Apple’s cynical attempt to kill the 3.5 mm socket to boost their own profit margins, the best-sounding DAP you can buy in 2022 is now a smartphone with a 3.5 mm socket.